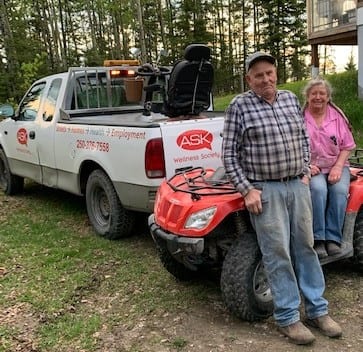 Stories
On a spring day in early March 2020, Dave Ashburn, 58, was out of money, prospects, and hope while he sat at an intersection in 100 Mile House looking out at the cars driving past on Highway 97.

On a spring day in early March of this year, Dave Ashburn, 58, was out of money, prospects, and hope while he sat at an intersection in 100 Mile House looking out at the cars driving past on Highway 97. He was contemplating suicide and concluded that he had three options: two involved taking his own life and the third was asking for help.

“I chose to go to the psych ward instead,” he says. “I knew it was going to be a bit of a longer road. The other two were going to be quicker with one taking just a few seconds and the other taking about six minutes to bleed out. I chose curtain number three.”

Ashburn was brought to Kamloops on March 6th and admitted to One-South at Royal Inland Hospital where he spent eight days in the psychiatric ward. During that time, he was referred to the Surge housing program operated by the ASK Wellness Society and run out of Bridgeway Manor on Columbia St. Surge housing is intended to be short term (two to three months) housing for people who would otherwise be released from hospital into homelessness. The program part is of a partnership between the ASK Wellness Society and Interior Health.

Being from out of town, Ashburn was taken aback by the level of support he received beginning with the staff at One-South.

“The help I got from the social worker at the hospital, I think her name was Jenny … she was the one that did all the paperwork and had me set up in less than eight days,” he noted, commending the fast response to his needs. “She didn’t even take me on until the third or fourth day so she got me out of there in just a few days.”

Once at Surge, Ashburn had several aspects of his life he felt he needed to get on track before he could move forward. He would need help with filing his taxes, he had limited possessions, he needed to apply for additional government assistance funding, and he has mobility issues that impede him from being able to look for work.

“I worked for forty years and a lot of heavy work”, he says. “Oil rigs, transport truck tires, heavy warehouses. Basically, my chassis is worn out.”

While staff at the Surge program worked with Ashburn to stabilize and figure out what the next step would look like, an encounter with an ASK Wellness Society staff member doing her nightly rounds of the facility would provide a solution to his mobility issues.

He had created a wish list for himself of what kinds of things he needed to move forward with his life and on that list was a scooter, so it seemed like the universe was listening when one night ASK Wellness Scoiety Chief Operations Officer Kim Galloway stopped by and chatted with Dave.

“I said I think I’m going to try and find a used scooter on Kijiji or whatever,” he says, recalling his encounter with Galloway. “She says ‘Oh, you need a scooter’ I said ‘Yes’ so she called somebody right then and there as I was talking to her and she says ‘I’ve got somebody who needs a scooter’ and it was like bang.”

By the end of the next week the scooter donated by Mike and Dale Lehman of Pritchard (seen in photo) had made its way to Ashburn. The scooter was initially donated to the Lehman’s by the Turner family, also of Pritchard, but it was not going to be of much use to them so they reached out to the ASK Wellness Society to see if it could help anybody else.

“All they wanted was [enough] to cover the transportation cost,” says Ashburn.

Prior to getting the scooter, going anywhere was a challenge for Ashburn. Once he had it, he quickly found himself being able to do things that were a major struggle for him before.

“The first time I got to use it I was able to go to 7-11 and the Dollar Store and get all my shopping done,” he says.

Thanks to his own drive to move forward in life, as well as the added benefit of mobility, Ashburn has now transferred out the Surge housing program and into the Maverick; a transitional housing program with a focus on employment and connecting to community. While he is still trying to figure out exactly what the next stage of his life will look like, he says he hopes to do some volunteering and give back.

“I’m in that place where my mind tells me I can do it but my body says I can’t,” he says. “I have to find work that I enjoy and helps people and that I can do. I know because I am coming from a psych-ward I’m deemed a mental defect by society, but I have done a lot of stuff. I’ve done jobs that people get killed regularly and I came out with all my fingers and toes.”

Along with the ASK Wellness Scoiety and Interior Health, Ashburn notes that the Canadian Mental Health Association, Alcoholics Anonymous, and Narcotics Anonymous have also helped him on his path to wellness.

For more information on the programs noted in this story and others offered by the ASK Wellness Society, please visit askwellness.ca.

Dave is a former journalist and wanted to use his writing skills to show his appreciation for the community that has helped lift him up. Please read his own words below:

I arrived in Kamloops on the fifth of March. Three days after by 58th birthday. Only six days later, I was told by a super busy and highly efficient social worker at the hospital that ASK Wellness could provide me with temporary housing.

Being told you have housing in one week was only the first of many surprises and support I have received in a very short time. To have someone say, “The paperwork is all done. Here are a couple things you need to do to complete the process”. That literally meant the world to me!

Doors were opening. I was suddenly right at the door step of the security and stability I had prayed for. Even during the initial on set of this COVID crisis I received more blessings. In no time at all I was able to get a doctor to continue my treatment for pain and depression. A kind man on the 100 Mile House Facebook site brought my belongings to Kamloops. I must add, he was on his way for some major tests at the hospital.

In a few short weeks, Jamie at Bridgeway Manor helped me clear up two years of taxes. Bringing me up to date so to speak. A couple weeks later she informs me I am a candidate for long term housing called the Maverick.

A day or two later, having a conversation with another ASK Wellness worker, Kim. I tell her some kind of scooter would help me get around. She got on the phone immediately and casually tells me a few minutes later. “I put the word out. Probably have one for you next week”. Sure enough less than ten days later I’m informed that a scooter is waiting for me at the Maverick where I’m now going to on the third day of June.

Thinking I will have to pay at least a few hundred dollars for it, I’m told. It was donated free of charge from some kind souls in Pritchard. The mobility and access to shopping it provides is priceless. Again, blessing from strangers.

When I think of where we I was at and how far I’m come in a little over three months here in Kamloops, I have to thank God for His Providence. Especially how IT is manifested in the actions of all the first responders, support staff and volunteers in the health care system, and the people that work and volunteer for ASK Wellness.